RUSH: No, course not, I did not forget Android Auto. It wasn't released yet.

RUSH: All right, yes, that's right, the anniversary cake, the birthday - You got the cupcake that I like. That you were chintzy about last time, you only got me one. Is there more than one? 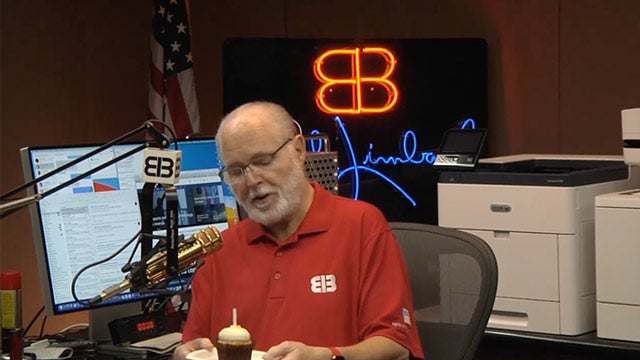 RUSH: Lemon. Lemon. Lemon. This program has never been a lemon, so I don't get the connection. But, at any rate, it's the 32nd anniversary of the program. Let me hit the Open Line Friday jingle so we can stay on schedule.

RUSH: I'm gonna blow out the candle here, folks. There we go. It's out. Lemon flavored. Is it all the way lemon, the cake and the icing or just the... (interruption) Oh. Lemon cream filling. All right. The 32nd anniversary of the program is actually tomorrow, and I had no idea whether they were gonna do something today or wait 'til Monday. Obviously they did it today.

We have some audio sound bites from the past. It's the 32nd. It's not like it's the 35th or the 40th so we're not gonna spend a whole lot of time, but we are gonna go back 'cause there's some real prescient stuff. Some of the things that I predicted when I was on with Mr. Buckley on Firing Line in the early 1990s, that's coming up.

And we had fireworks today. Jim Jordan and Dr. Fauci, wait 'til you hear this. If you have wanted pushback, that's what you're gonna hear. Jim Jordan was just relentless in dealing with Dr. Fauci today. What a great line (paraphrasing): "Should we cancel the protests or should we get everybody protesting, Dr. Fauci? What should we do here?" It's fascinating, and you're going to love hearing it.

RUSH: Let's get started with some of the anniversary audio sound bites. We don't have a lot. It's an off year. Our 32-year anniversary is tomorrow, 32 years on the same program -- and 30 of those years have been spent as the legitimate, genuine, most listened to radio talk show in the country, a legitimate number one. I've always been underestimated.

I'm one of the many who has. I'm sure many of you in this audience have grown up being underestimated by people in your own family, by friends, by people that know you. And I just want you to know that I am one of those. And my mother had to deal with this when I was in kindergarten. Now, they called kindergarten "the training school" when I was growing up.

The Kindergarten was part of the university -- well, it wasn't a university -- of Southwest Missouri State College. And the kindergarten up there that we went to is called the training school. I don't know why. It just was. And my mother told a story of being summoned by one of the training schoolteachers to come in for a conference about her son...

MRS. LIMBAUGH: We had four- and five year-old kindergarten here at the college -- you know, "the training school," they called it -- and one day the teacher, who is now gone, had me in for conference, like she did all the parents. She said, "If Rush doesn't..." She called him Rush. "If Rush doesn't change his ways, he'll never grow to be the man his grandfather is or his father." (laughing) 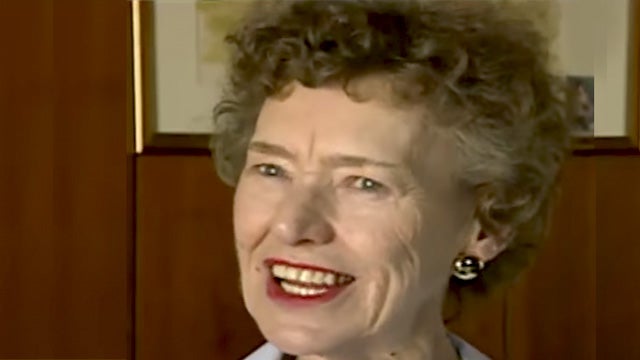 RUSH: Four years old -- 4 years old -- and the teacher called her in to tell her, "If..." My name growing up was Rusty. "If Rush doesn't change his ways," a 4-year-old... "If Rush doesn't change his ways, he'll never be the man his grandfather, certainly not the man his father is." My mother just laughed it all off. She never bought any of this stuff.

She was not the kind of mother that got worried about this stuff. She just, Yes, sir, yes, sir, three bags full'd 'em, and I didn't even know this had happened until she's telling this story for one of the videos we produced. Now let's go back. Let's review a segment of the 60 Minutes profile of me, which happened October 6, 1991

During this portion of the segment on me, this is where they let everybody know that everybody knew I wouldn't last. Not a chance. I was a flash in the pan, you know, simply a fad.

KROFT: People have called you a sexist.

KROFT: People have called you a homophobe. 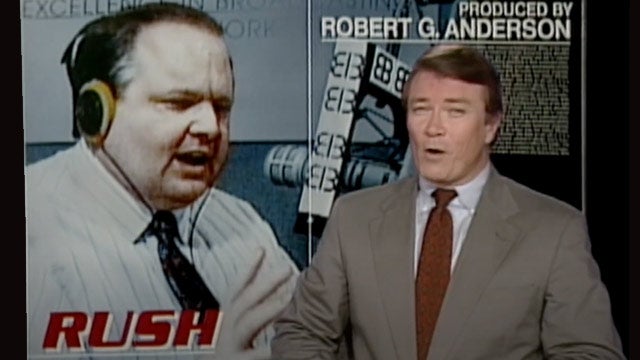 RUSH: Of course not! I'm none of those things. I am... I am simply someone who views events in life and comments on them. I have my own version of what's right and wrong.

KROFT: (voice over) Wil Williams heads a Rush Limbaugh Task Force for the Gay and Lesbian Alliance Against Defamation.

RUSH ARCHIVE: I don't know how more clear it can be...

KROFT: He says Limbaugh is just the latest in a long line of radio and TV hatemongers.

WILLIAMS: The overwhelming majority of the American people are not bigots, and when they find out about Rush Limbaugh types -- as they did about Morton Downey Jr. and when they found out about Andrew Dice Clay -- they stepped in, and cr... Such people's careers take a dive.

KROFT: And you think that's what will happen to Rush Limbaugh?

WILLIAMS: I think so.

KROFT: It's not going to happen?

Nobody who knew me thought I hated anybody. In fact, people who knew me thought I ought to be suspicious of more people than I was, that I was too trusting, that I didn't recognize enemies that I had out there. And I said, "I don't want to go through life that way." But this is 60 Minutes in 1991. So this is 31 years ago -- or 30 years ago -- and nothing has changed. 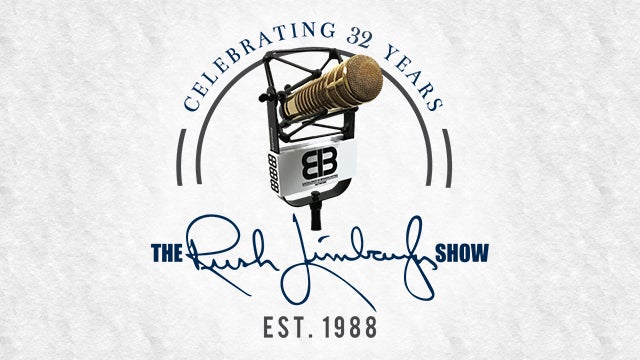 Nothing's changed. If you're conservative, it's obligatory racist, sexist, bigot, homophobe. Now, up next, this is a (we got time to squeeze it in) 22-second montage of all of the contrived controversies over these 32 years. Dozens of times the Drive-By Media, dozens of times the Democrat Party thought they had finally done it, they had found a way to get rid of me -- or that I had stepped in it.

I had created my own controversy. I'd created my own mistakes. And I was finished. I was done. And, of course, still here. Thirty-two years later, I'm still here -- and, of course, you know why? It's real simple. These people in the media did not make me. They're not the reason you began to listen. I am. If I was the product of media hype, then they could kill me. They could take me out.

But they had nothing to do with it. In fact, from the moment I started my national program in 1988, they did try to do great damage to me and the program. I have never been a beneficiary of media buzz or hype. It's always been a negative. So here is a montage of the various controversies over the years and the things people have said that they were just convinced I was either guilty or finished. Listen.

TED KOPPEL: (December 8, 1993) Rush Limbaugh, to the left, he is sort of like an aching tooth: They can't stand him, but they can't leave him alone.

BRIAN WILLIAMS: (March 1, 2012) A growing firestorm over comments made by Rush Limbaugh.

BILL CLINTON (aboard Air Force One): (June 24, 1994) After I get off the radio today, with you, Rush Limbaugh will have three hours to say whatever he wants. And there's no truth detector.

CAROL COSTELLO: (October 20, 2009) Rush Limbaugh. Influential, sure. But powerful? Some say even with Limbaugh's vast audience... No!

LISA SYLVESTER: (March 5, 2012) The National Organization for Women are demanding that Clear Channel pull him off the air altogether.

BOB NOVAK: (October 4, 2003) Heaven help us if they think they caused Rush's demise.

ASHLEIGH BANFIELD: (March 5, 2012) What year is this, Limbaugh? Shut your cake hole!

BARBARA BOXER: (February 29, 2012) Rush Limbaugh has hurt and insulted every woman in America.

JAMES CARVILLE: We've put Rush Limbaugh in our polls for a long time. He's been unpopular in every one.

JAN CRAWFORD: (March 5, 2012) Limbaugh has some defenders but they were drowned out by those protests on the left.

BROOKE BALDWIN: (March 6, 2012) Will this hurt the Rush Limbaugh brand.

HOWARD KURTZ: (March 6, 2012) I haven't seen a backlash of this magnitude involving Limbaugh.

JON SCOTT: (October 3, 2007) Democrats are calling for an apology from Limbaugh for calling troops "phony soldiers."

BARACK OBAMA: (April 2, 2010) When you listen to Rush Limbaugh, it's troublesome.

TINA BROWN: (Dec. 31, 2009) Rush Limbaugh utters the words "I hope he fails." From that moment the rest of the year has been just this big discord and toxic atmosphere.

RUSH: Rush Limbaugh, too big to fail. What was the culmination -- so all of this, over 32 years, they thought that it was over for me. They were gonna make it happen. Every one of their polling results and focus groups told them that I had done too much now, overstepped it. And yet this past February 4th in Washington, D.C.\

THE PRESIDENT: Almost every American family knows the pain when a loved one is diagnosed with a serious illness. Here tonight is a special man, someone beloved by millions of Americans who just received a Stage 4 advanced cancer diagnosis. This is not good news, but what is good news is that he is the greatest fighter and winner that you will ever meet. Rush Limbaugh, thank you for your decades of tireless devotion to our country.

THE PRESIDENT: And Rush, in recognition of all that you have done for our Nation, the millions of people a day that you speak to and inspire, and all of the incredible work that you have done for charity, I am proud to announce tonight that you will be receiving our country's highest civilian honor, the Presidential Medal of Freedom.

RUSH: Can you imagine how all these people after 32 years of trying to undermine me, destroy me and the program, imagine how they were reacting to this? All those who had predicted that I would not last. Oh, man. Frothing with hatred, they were, no doubt.

THE PRESIDENT: I will now ask the First Lady of the United States to please stand and present you with the honor. 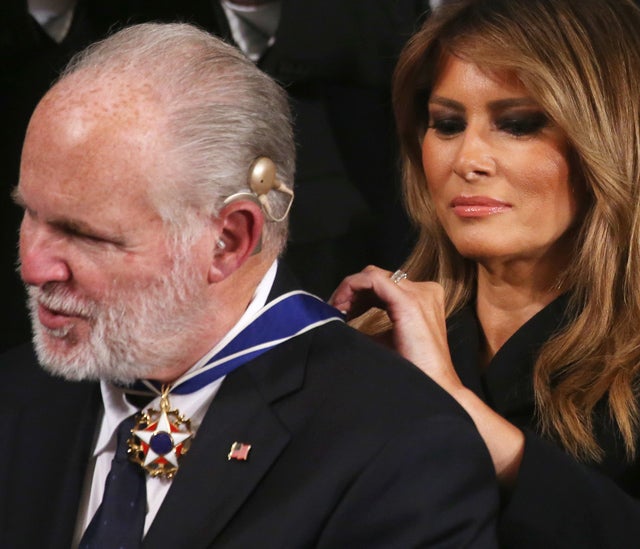 RUSH: I hear some boos out there among the Democrats?

RUSH: Okay, we gotta get out of it, folks. I had no idea this thing was three minutes long. I thought it was 30 seconds long. I didn't see the time there at the end. We're way long. Gotta go.